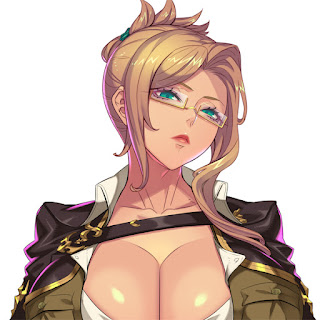 Here we are with the next emoticon.
This time the default expression for Instructor Stella, a recruitable ally who'll spearhead your troops during the expedition mini-game and also offer her services as an instructor to help your party members level up, in case they've fallen behind.

It's been a pretty Stella focused week too with a couple of small cutscenes in process, and your first/initial dialogue with Beatrix altered to mention your mentor during Crusader training.

I've also been making a bit more progression with the expeditions, and I think that's about everything I have to report for this week.

Tune in next Tuesday for more as always, though!

I figured out a good use for the old, previously unused stables in the courtyard.
A gymnasium/dojo that'll give Stella a second purpose where you can pay her to train your party members to gain experience and be boosted to the same level as the main character, but the higher the gap, the more expensive it'll be. (Currently a range between 5,000-30,000)

It went through a couple of iterations before I could find one that worked and I felt satisfied with, so while it's fully implemented now, it took up the vast majority of this week to get right.

And that's just about it for today, I fear! But another update is coming next week as always!

This 'effing heatwave can go away any day now, am I right!?

While I originally really wanted Lady Farah to be in focus for the expedition mechanic since she has the diplomatic skills required to enlist new recruits and make your army grow, I quickly realized she was a poor fit for leading soldiers into battle during the liberations.
Lady Farah and Queen Opala depended on Supreme Commander Seth to oversee the Egyptian Army for a reason, you know?
I'd also be a pretty big oversight on Devon's part to willingly put her in harms way, and while Beatrix surely would've been a good fit as well, having a character be apart of the expedition mechanic also mean they'll be absent from Castle Warrengard and/or your party during those sequences.

So to work around it all, Stella is being introduced.
She'll be the cruel, uncompromissing instructor who'll spearhead your operations and whip your recruits into real soldiers, as she was once with the Beldorian Forces and the teacher who trained the Crusaders.

She might look like Quistis from Final Fantasy VIII, but if anyone was the inspiration of her design, I'd say Meiko from Prison School.

And just like that, another week is ahead of us!

Y'all know the drill!

In a way, this week has also been spent on the expedition mechanic.
Although in a different way as I've expanded Castle Warrengard with two more things to build, a larger stable and a forward camp, both located outside the citadel on each side of the main road.
The stables will allow you to recruit Sunny-Sue Ellen to come living and running the show for you, and the forward camp will give your army a place to stay while also letting you send out expeditions without the need to visit your chambers or having it built/upgraded in the first place.
If you already have your private quarters done and ignore to build the forward camp, you can still send out expeditions, but you won't be able to boost your army with additional troops, making liberations harder to pull off.

The old stable in the courtyard will be repurposed to something else, and whatever I turn it into, you won't have to build/upgrade it again if you've already done so.

That's about it for now! See you guys again next Tuesday!

Time to nail down one more of these!

This is another week almost entirely spent on the expedition mechanic.
The majority probably being on making the fog of war adapting to every outcome, as each point liberated dissolve a portion of the fog and reveals additional locations to explore/liberate.
It came down to 27 variations in total.

I've also added some illustrations for scenes and mini-games previously missing other art styles, along with updating the displayed text for when gaining/losing relationship and the hero/renegade points during conversations so it's displayed in the same font as the dialogue.

But that's all for this week, so onward to the next Tuesday!

Let's get this show on the road, shall we?

I've spent pretty much this entire week working on the mechanic I mentioned in the last update.
It's panning out better than expected with lots of opportunities presenting themselves as I progress, it'll essentially be a strategy mini-game where you move your troops across a tiny version of the Beldorian Empire worldmap and claim military checkpoints to remove a fog of war and unlock more areas where you can boost your army and send them on expeditions to bring back stuff.
Claiming checkpoints also effects the main game, like I said last week with how liberating the Imperial Manor will give you back access to the location and let you "rescue" Layla the Mare.
I debated with myself who should lead the army in the field for strategy/diplomacy, and it came down to either creating a new character for the purpose, have it be Beatrix, or even Lady Farah.
Taking everything into account, I figured the best choice would probably be Lady Farah.

Oh, I've also published the comic "In the Shadow of Anubis III - Chapter 02" on my Patreon!

And that's about it, see you guys again next Tuesday!

Where do I even start this week! Well, since I only did one thing, let's begin there!

Okay, so I may have lied with the opening line to make a joke as I've done more than that.
A frequently requested fan-favorite has been implemented with everything it entails, and that comes in the form of Naz'Raala now being recruitable to join your party with her unique set of skills.
She might not be much of a team-player with her background, but she is certainly more than capable of being the last (wo)man standing against a tough opponent and is quite the heavy hitter.
Just like everyone else in the party, Naz'Raala will also show up in camp after joining, have a helmless outfit unlocked through Strippin' o' Die and have her own set of weapons/costumes.

Another thing I've been working on is a mechanic where you can send your army to liberate area, but this is still very early in the planning stage so I can't confirm it'll actually pan out.
However, it's something I've always intended to do for quite some time, for example, it'd be a way to regain access to the Imperial Manor so you can visit the location again and have Layla the maiden mare moved to Castle Warrengard.

I also found the time to finish writing the dialogues for "In the Shadow of Anubis II - Chapter 2" by Devil_HS, so it should be available on my Patreon at the end of the month if everything checks out!

Thus, enjoy your Tuesday and I'll see you next week!