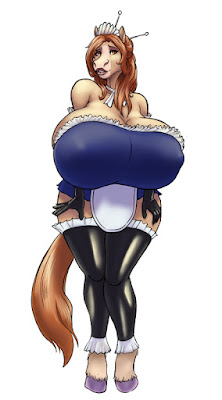 Poor Layla the mare...
It can't be easy being a horse in a house full of humans.
Because let's face it, they'll have a hard time finding a maid outfit to fit her measurements and dat wide, horse ass, meant to take it from behind.
But there you have it, Layla's "battlepose" for the game!
Although I doubt she'll ever be an active party member in battle, unless her special skills involves bowing, bending and leaning over.

Either way, production is going along fine and the next beta should hit early this weekend with a few bug fixes and including the new "Explorer" title tracking system, along with the safe cracking activity.
I've also made an effort to go over every single enemy in the game and tweak each one to offer more variety in strategies, something I should've done from the very first LoQO game I made...

What this means is that more often than not, if an enemy has a particular strength, there will be some kind of way to nerf him with spells or skills.
Say...like if a big, mean stone guy has super powerful magic spells, then you can either "Silence" him, making it impossible for him to cast spells at all, and if that doesn't work, then he might instead be weak towards "Feeble", which halves his magic damage output.
This should hopefully make the battles more enjoyable, especially boss fights!

And with that, I hope you'll look forward to v1.05 hitting this Friday/Saturday and with the next beta including a new region on the worldmap to be introduced during next month!

"Never tell me the updates!" 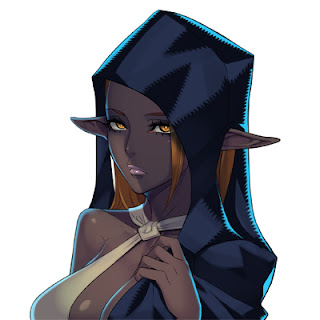 What has been going on this week?
Well, I've been implementing the new title display system I mentioned before that will change how "Explorer" specific titles will show and track information.
Mind you, this will only affect and involve discovered locations as the new display will allow more than four lines of text to be shown at the same time, which otherwise is the default limit for RPG Maker XP text bars.

So with the new system, you are able to track all illustration related activities at the same time in the same window, and it also allows me to add more obtainable art in each area as the tracking system is much easier for me to handle now.

Speaking about illustration related activities, a new one will be added in the next beta as well!
The new one involves safe cracking where you have to guess the combination code to break the lock, once one has been located and interracted with, several glowing areas similar to looting spots will show up in various places in the same building as the safe.
Not all are being useful while other's give code fragments, but it's not very tricky.  :3

And with that, enjoy Black Dame's normal emoticon and see you next week!
Posted by SweGabe at 11:11 AM 26 comments: 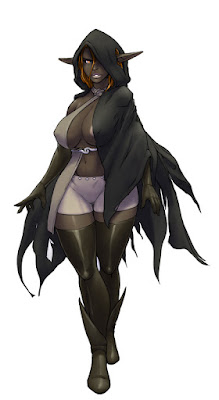 Despite suffering from two power blackouts within two hours, and losing just as much progression, I was still able to release the latest beta during the weekend which introduced the new look for Black Dame, the Information Broker, and characters Queen Opala, Layla the Mare, and of course Mhu'Tiki.

So yes, the damn High Lord Gathering arc of the game is finally over and the next step will be to open the Gates of He...err, let people pass the River Checkpoint and into Arlon Farmlands, the next wide open worldmap terrain in the game with plenty of new locations to explore!

This also means we're getting closer to the introduction of Kristallia the Crystal Fairy and Naz'Raala the Barbarian, along with Castle Warrengard that will be your personal resident for this title.
So I'm certainly not running out of ideas to use anytime soon!
And with that I'll see you again next week!
Posted by SweGabe at 12:38 PM 39 comments:

"Come with me, if you want to update..."
Support me and production of the LoQO games at - Patreon

So the monthly question this time around was how you'd deal with a female traitor in your party, with 3056 votes gathered!

The votes are clear...any traitor would come off pretty easily! ;D

And at long last, the High Lord Gathering arc of the game is finally completed after tinkering with the cutscenes and conversations for far too long before I became happy with the results!
Now I only need to tie a few lose ends that comes with unlocking content by progressing with the new story, and I should be ready to release the next beta!

You should even be able to expect it arriving towards the end of this week!
So with that short update, I'll see you again during the next Tuesday! :3
Posted by SweGabe at 11:34 AM 26 comments:

I have exciting news!
But since a picture says more than a thousand words, I'll just leave it at that.

And if you haven't guessed it already - April's Fool Day! :D 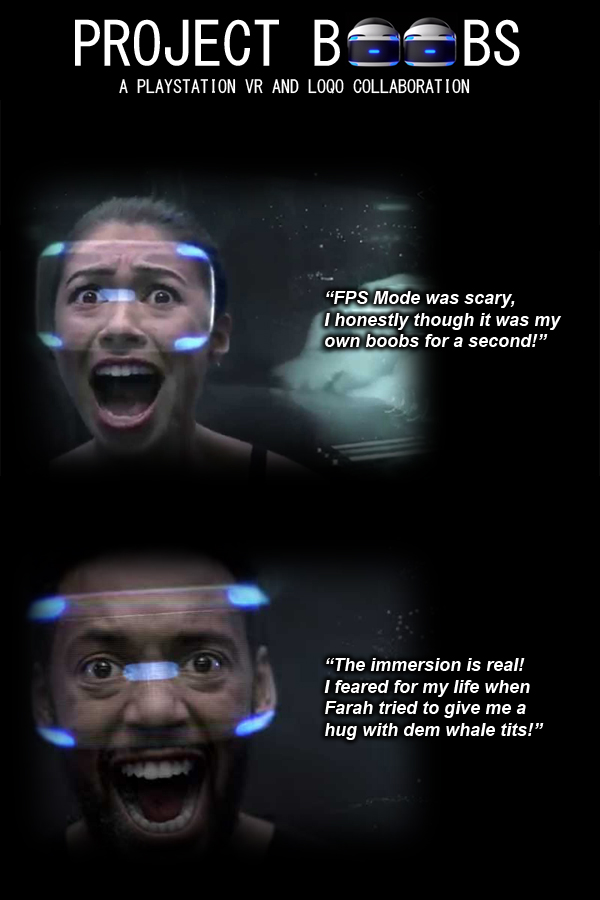