It's Tuesday, and you know what that means! Yesterday was Monday, it's true!

This whole week was spend on one thing, working on the next CG Scene I mentioned before.
Having a full CG Scene take so long to add is nothing new as it's always been like that, I often go over the descriptions several times and have them tweaked, replaced and restructured as the prefectionist in me refuses to just "leave it be" and move on.
As I said on my Twitter over the weekend, being a perfectionist doesn't mean something has to be good, it just means you can't ignore anything you notice. x3
However, this particular scene actually ended up being the longest one I've ever written for any of the games as there is a lot of things going on, and while I don't want to spoil anything, I can at least hint at there being some cunnilingus involved!

And with that, I'll see you guys again next week as always!
Posted by SweGabe at 12:56 PM 16 comments:

Believe it or not, it's been a week since the last Tuesday! And that means update time!

Although it's going to sound like I've done a lot less than I have, because this whole week I've been working on this pretty significant cutscene that'll reveal some plot points, one or two perhaps more obvious than others, but it's also a cutscene that ends with another full CG Scene!
I'm entirely to blame, of course, because I'm picky and keep re-writing and re-arranging the dialogues to make sure it doesn't reveal too much, yet at the same time lets all involved characters stay in...uhh...character.
I'll probably go over the cutscene two or three more times, but then it's all done and I can jump directly into the CG Scene, which should take less time, and be finished by the next update

Oh, and unrelated, I was recently interviewed by Doujins.com if anyone want to read up on it.
Probably nothing new, except the part where I might've hinted towards what'll come after Origin is finished, even though that is still ways off. x3

And with that, I'll see you guys again at the next Angry Ra'Tiki Show!
Posted by SweGabe at 11:29 AM 33 comments:

The week of being more lazy than usual and watching game streaming is over...sadface.

But no time to mourn! Due to AGDQ though, this will be a pretty shallow update as all I've managed to do is get a few trading cards done, fixed an elusive, rare bug and worked on a couple of more maps.
In case the bug had your curious, it can only be triggered in some cutscenes related battles, and only if one of the partymembers are knocked out in combat, for some reason, this makes the protagonist appear twice in the cutscene after the battle is over.
I've also solved how to trade in already earned titles for Lewd Boxes, which won't be just a beta feature since people who played the public releases of episodes 1-2 would also need that function in case they don't want to start over from scratch.
And...that's about it?

Oh! I guess I could ask you nice people if you happen to know any sexy, potentionally busty female Streamer/Let's Player who might be acceptable to promoting LoQO without chasing me away and calling me names. (The lovely Queeny doesn't count, since she already did it!)
Sorry to be sexist, but let's face it...a pair of big boobs with a cleavage will likely appeal more to my audience than a beard. ;3 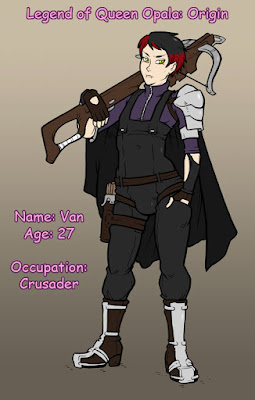 I know what you're thinking, but bear with me!
This is Van, the third (and last) Crusader of the Beldorian Empire and a character that has kinda been in development hell since day one since he was always meant to be added but went through several drafts.

And I know I said "he", but you guys know me by now...I can be a little sneaky, so I'll be tossing up some food for your minds to ponder on. ;3
Is Van really a guy? Is he a feminine guy? Is he a she who tries to be a he!? Do we have our first shemale? Did SweGabe broke and we have our first gay character!? I guess only time will tell as he is added to the game and players start to find out more about him themselves, fu fu fu...

Meanwhile in game development, I was working on the next set of cutscenes as AGDQ came out of nowhere and distracted me! So I fear while it's still on, I probably won't be able to focus on storytelling and will spend the week on getting more trading cards done instead.

See you guys again during the next update, next Tuesday, next week!
Posted by SweGabe at 1:57 PM 42 comments: 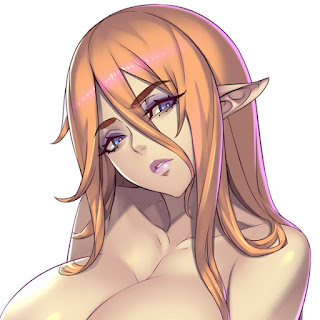 And let's kick off the new year by introducing a familiar face, one who has technically been a villain since the first game, alongside Osira.
However, if you never finished LoQOII or haven't played the earlier games, you would be clueless as to "how".

Some of you might've figured out what part she has already played in the story, even though you haven't actually met her...only overheard a conversation between her and another person, but she is very much a presence, although more of a background character so far.

In more game development related news, while it took longer than expected, I've finished adding all the cosplay photos to the game and also took the time to visually update the trading card/cosplay photo gallery as they share the same display layout.
It's barely noticeable, but it makes the galleries look less "empty" since the previous update which removed the huge bar covering all corners and taking up valuable space.
And...that's about it!

Hope you're having a great start on the new year, and I'll see you next week again! :D
Posted by SweGabe at 12:23 PM 43 comments: