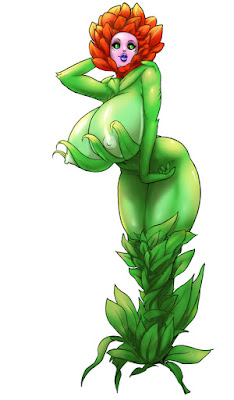 Support production of the LoQO games at - Patreon
And/Or follow me on - Twitter
Boop, Roseus battlepose appearance!
It's been a few busy couple of days with the release of the latest beta on Sunday, followed by another one just before I made this post, although the later was more of a quickfix than anything else.

But since last week I mostly worked on getting the beta out on time and finishing off all areas of Kahr and filling in a few gaps here and there.
So I think I can make an official announcement that March will be the release month of LoQO: Origin Episode II, I feel pretty confident I can wrap up everything until then if we have smooth sailing and nothing prevents the CG artists to finish off the last remaining scenes in time.

As for the mystery revelation I mentioned during the last update, that has to remain a secret a little while longer until I know it's a sure thing...whatever it may be. 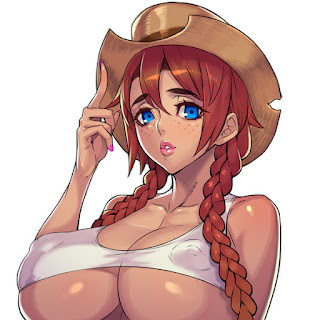 I'm kinda glad Sunny-Sue Ellen was announced before Final Fantasy XV was released, because people will prooooobably notice some familiar traits between my character and a certain blonde, soap soaked, car rubbing gas chick...she polish that car soooo gewd and only Pronto ain't gay about it.
Anyway, here is the normal emoticon for Sunny-Sue Ellen who works at her dad's place called Uncle Dad's Farm!

In other news, store setup, only indoor NPC placements and illustration/chests locations are left before the next beta can be released, which should be this weekend! It'll come with a visually update world map that displays location names a bit differently, instead of visiting places, you'll buy region maps that shows all location names automatically on the world map except the "hidden" ones that still need to be manually discovered before they pop up.
How the location names also show up on the screen when you first visit a new place has also been changed, both how it looks and how it displays and will no longer be cutted out or suddenly disappear simply because you make a map transition or leave.

And while there is still a long way to go before the game is completely finished, as in fully, I've finished nailing down the last details on where I want the story to go and how it'll end...so if you can data-mine my brain through wi-fi, you'll get some preeeeetty interesting and surprising details about what is coming. x3

But I'll see you again in the next update, one beta later and maybe with a special announcement if I can seal a certain deal I know LoQO players will love to have in the game... ;)
Posted by SweGabe at 1:10 PM 50 comments: 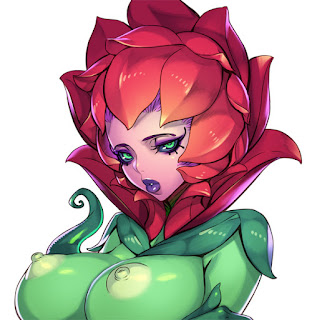 And here we have the next emoticon preview, monster girl Roseus in all her normal expression glory! She is a babe with her priorities set straight as she'll likely directly ask for you to pollinate her...and c'mon, how would you say no? You're doing something heroic for nature!

Meanwhile, Kahr is almost done with the outdoor areas finished with NPC's sprawling all over the place and only the indoor locations remaining...which ended up possible being the same size as Colussia, if not one or two houses bigger in terms of exploration.

The story has also moved onto the city where the second-to-last major story event takes place before heading into the last sequence of the episode.
While I feel very confident I'll be done with the story in a few weeks, but I need to remind people there is so much more than needs to be done besides that, side-quests, CG Scenes, optional content etc. so February/March is still the predicted launch date. :) 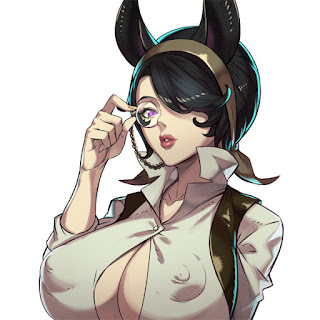 Ta-daam! A new emoticon, this time with Zweibelle and her normal expression, one of the characters you'll be introduced to during the course of episode 2 of LoQO: Origin and who could show up in the next beta too!

For those of you who've been following my Twitter might've noticed my outburst of relief over the weekend as I've finally finished the Castle Warrengard arc and is now moving on to the last two traveling points the story takes place in for episode 2, and I'm almost done creating the layout of the city of Kahr in Harmonia Sands too which is possibly bigger than Brightstone, but smaller than Colussia.
If I can finish everything about it this month, aka adding NPC, events, looting spots etc, the next beta will be released in January with the final, and last beta in February! :D

Enjoy GamesDoneQuick this week and I'll see you again next Tuesday!
Posted by SweGabe at 11:28 AM 33 comments: 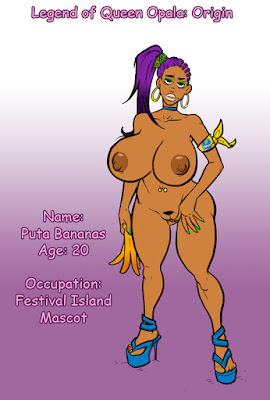 Support production of the LoQO games at - Patreon
And/Or follow me on - Twitter
First update of 2017, the year episode 2 of LoQO: Origin will be released for certain!

Let's kick off the new year with introducing a character I've been talking about a few times before, Festival Island's new owner and mascot.
Puta Bananas! She single-handedly breathed new life into the island and is quite famous for her "Banana Split" where she shows how tight she can be by peeling a banana by simply inserting one into her pu...well, I think you get the meaning. *Wink Wink* 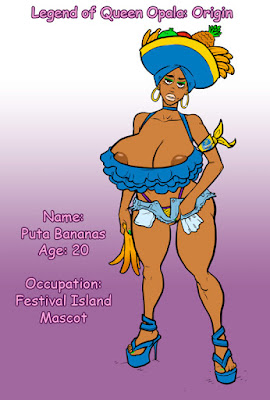 Although, she can also be pretty bitchy and rude in person...maybe she isn't doing the whole mascot gig out of pride, but rather to just piss off her daddy or something, whoever that is. ;P

But game development has been going smoothly as well, Castle Warrengard arc is temporarily paused at the moment to make time for adding the last part of the map for episode 2 and polishing up on the scenarios leading up to and concluding those four new scenes I mentioned in the last update, one even being a bit of a repeatable side-quest.

I'll see you again next Tuesday as clockwork!