And what better way to begin than to crush you hopes and dreams, this will be a pretty lame one.
The latest beta was released over the weekend, so most of the time prior to that was spent on prepping the game for the launch, while the time after has been on fixing a few bugs.

That's...pretty much it really.
Although, Black Dame and Naz'Raala is also available in the webshop now, if you're into those!

And with that, onward to a hopefully more eventful Tuesday next week!
Posted by SweGabe at 3:33 PM 18 comments:

This has been a bit of a rough week!
While waiting for my muse to kick into gear again so I can get some more cutscenes done, I've been struggling a bit to work the stripping dice game into the other characters, and I made it far more complicated than it had to be before coming up with the best solution. Dx
In the end, I decided Bal'Rana shows up in your private quarters like before, but in a slightly prolonged cutscene where you get to have your first match against her and is taught the game, from there you get a short tutorial describing how it works and then you can simply invite the party members to your chamber for a game! (But only Bal'Rana, Mhu'Tiki and Gabrielle is ready so far)
And with that, I can announce the next beta will be out this weekend!

That's not all, here is a teaser for the Black Dame figurine!
If everything checks out, she and Naz'Raala should be available for purchase this weekend as well!

See you guys during the next update, one beta later! 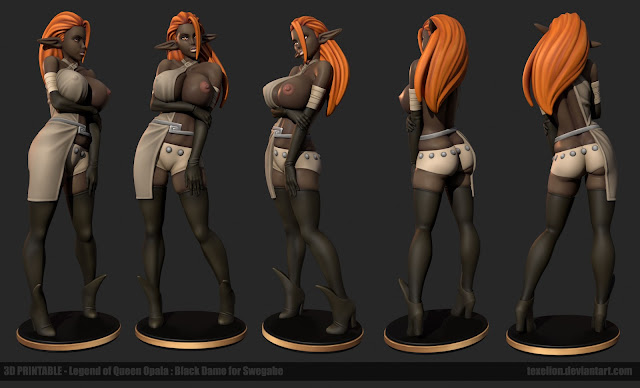 Ah yes, this is one of those weeks where it feels like I haven't done anything...
Of course, that is not true! This week was spent on adding Farah to the "tent mechanic" taking place in the cities, along with updating her mini-game and Gabrielle's Tavern Wench Challenge with the International Edition CG Style.
I've also updated the Encyclopedia with the latest enemies and locations.
Buuuuuut...I think that's about it for this week? D;

Oh! And while she isn't ready for purchase yet, here is a teaser for the Naz'Raala figurine!
There will be a couple of new ones available around the end of the month, so if you've been looking forward to that, then there you go!

So with that short update, I'll see you guys again next week! 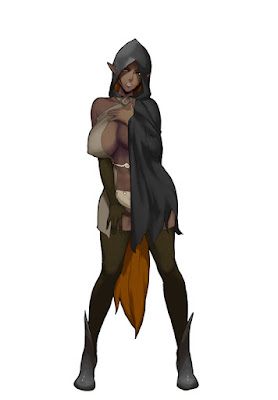 After a lot editing, re-editing and re-effin-editing, I think I'm finally happy how all the previous cutscenes with Zweibelle shaped out with her finalized background story set in stone.
But besides being just a perfectionist weener, I made the first cutscene with Cecily manditory (the main character's mother) and tweaked some content to the opening sequences.
So that previous cutscene with her is now officially weaved into the story like if it was always there.

I've also added a new, optional cutscene with Cecily that gives the world a bit more perspective, along with adding Gabrielle and Mhu'Tiki to the new strip dice mini-game.
If it wasn't obvious by now, Black Dame has her battlepose done in the new artstyle as well!

And with that, I'll have my daily nap before getting high on coffee and head back into work!
Posted by SweGabe at 2:37 PM 11 comments: 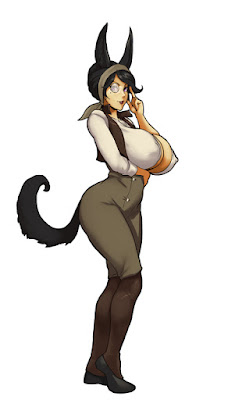 Since this is a very Zweibelle oriented update, I thought I'd double down on it and also share her "battlepose" in the new art style!

This week I've been working on finishing the next cutscene that takes place immediently after where the latest beta left off, so players won't be stuck in the infinite loop of deciding what to do with the miners of Skalhalm.
But I also realized I had to go back and alter all the dialogues/cutscenes Zweibelle has been in before as the old her had not the same background she does now, as in...she didn't had a more specific background before, although now when I've filled in all the details about who Zweibelle is in the background, those old cutscenes wouldn't make sense where I'm going with the story.

So I'll be listing all the changes below, for those who have already seen the cutscenes and wish to know what is different.

In the old version, Zweibelle didn't know the Dragons of the Nine were real and was informed about them through Naluna.
Zweibelle also had a sense of admiration of Crayden and only decided to work for him when she was offered unlimited resources.

In the new version, Zweibelle knew about the Dragons of the Nine from before, even by their individual names, and was looking for the one slumbering beneath Kahr to confirm they were all still around, not just Nabonaga. (She still learned the location from Naluna)
She was also working for the Beldorian Empire, even before Crayden and Laquadia came, as Zweibelle is the inventor and creator of all the technology in the Empire, with Farsyne and Melforas being her apprentices.

And with that, I'll see you next week as always!
Posted by SweGabe at 2:46 PM 12 comments: