I should really do something about the title names for these updates, they don't exactly make the blog look exciting when several weeks are named the same thing in a row...

Anyhoo! The CG Scenes for the Art Gallery is done being remade at last, and I'm focusing on the next thing which is the final cutscene taking place during the Colussia arc, although I may add an optional one in there as well.
Then there is the matter of the next beta I said should be out this month too, but unfortunately I may have to delay that one week so I can get this cutscene done and wrap up the Colussia arc.
To release something right now would make things a bit complicated as the story currently has your party split up to cover more ground, and releasing a beta before they join up again means the "post-game" content for where the last beta left off would have you go alone with none of the female partymembers showing up anywhere.
So I apologize about that, but the additional wait won't be for long!

Alright, I hope this will be the last, boring week for a while now!

The new layout for the gallery is almost done, I only have Internation Edition left but that should be done within two more days or so, then it's back to more fun things than tweaking thousand of numbers for hours upon hours, days after days, weeks in a row! 8D
But yeah, the next beta should be out later this month too!

Sorry for the slightly later than usual update, or if I come across as a bumbling fool!
They both share the same fault, I just woke up! Dx

This week has been a bit of a chore, all I can say is I'm happy I decided to give the gallery the update now instead of later when even more CG Scenes are available.
I'm a little bit over half-way done with the overhaul, but the remaining work should go faster since the International Edition version of the gallery has less illustrations done.
So while I keep hammering away at that, let's make this update seem a little bit more significant than it is by having me answer/clarify a few common questions that's usually thrown around.

1) I will have another look at some point into having the sprint function work indoors.
2) You will eventually be able to replay CG Scenes with text/choices available. (Like in LoQOII)
3) Collectables will never be missable, you'll be able to go back to all locations at some point.
4) A pregnancy system is considered, but would likely be an end-game feature.
5) Episode 3 will be released this year for certain, hopefully before summer too.
6) Emerald Gems will allow you to purchase CG Scenes from all the different CG styles and/or unlock their variations through a special shop that'll be included later on.

Peek-a-boo, someone can surely see you!

I regret to say I'm still stuck on one particular cutscene in the game that has me kneading my noggin, I have gone back to tweak a few previous cutscenes to help set it up better...but I'm at a loss at how to proceed properly, as it's something rather important, and one I don't wish to rush.
So while I'm pondering on solutions, I decided to give the gallery some much needed improvement to make each page be far more efficient with space handling, although it's unfortunately a slow and tedious process that'll likely take me a week to fully finish in all the various CG styles.

The section of the gallery that handles the optional illustrations will have to wait until later before being updated, as that might just take even longer, and you can see a sample below of the current layout, going from only displaying nine squares, to sixteen instead.
Sorry about that lack of new content, but I suspect after the Colussia arc is all wrapped up, there is just another part left before all storymode content for episode 3 is done!

And with that, I'll see you guys again next week! 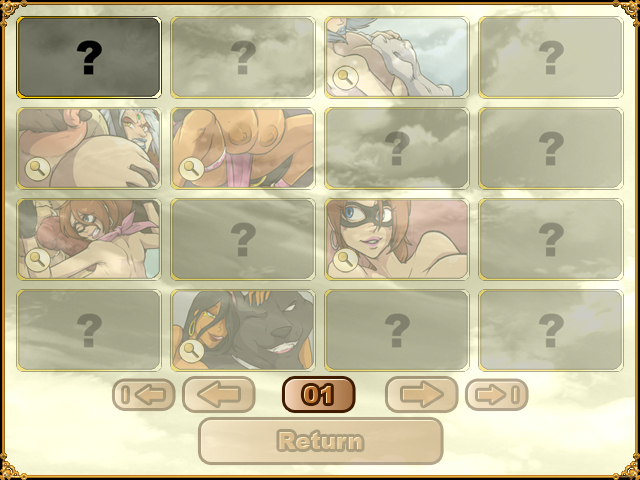