"You were almost a Update Sandwich!"


Phew, we're having a sweaty summer right now in Sweden!
But that seem to becoming the norm as the previous year or two were no better.

Anyway! I've regained my focus on the storymode for LoQO:O and have been working on that this past week, programming the next scene after leaving the Grand Bridge, but also going back to change and polish a few dialogues during the High Lord Gathering I wasn't entirely satisfied with.
And...err, that's about it really, but after this cutscene is over, the path over River Checkpoint will open up naturally according to the story, rather than be magically open from before since I wanted players to experience all the new areas beyond that point. x3

I was also thinking long and hard over what I should be previewing in this update...
And I decided to go with screenshot thumbnails of the first adult LoQO movie made, starring Playboy Playmate Angel Wicky as Illumi, with the scene called in a typical corny porn-name for "Illumi's Reward: A Backdoor to All the Answers"

This movie will be shared at the beginning of August to everyone pledging $20 or more, and will be a constant, monthly reward from now on, just like the latest beta has always been. :D

And with that, I'll see you next week when I'll be a year older! 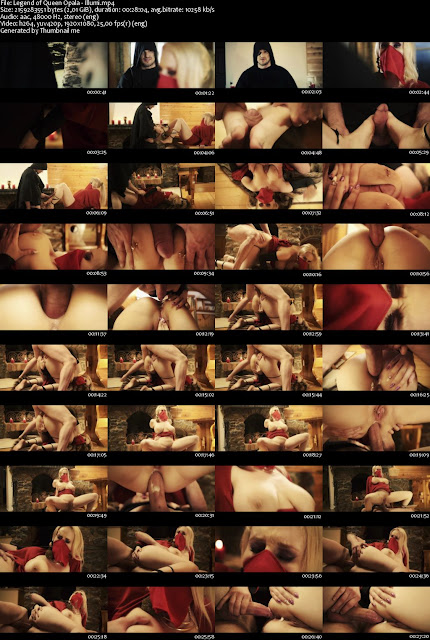 "You updated! Ah, damn you! God damn you all to hell!"

Sorry for the lack of pictures lately, but most of the emoticons, solo poses and battleposes I have left are highly classified spoiler material containing two females that'll show up for the first time within the game eventually. ;)
All I can really do is to inform you what I've been doing this week!
And yeah, all the time has been spent on the Encyclopedia to add the new locations and enemies included in the previous beta, along with making sure they're all listed correctly.
I've also updated the trading card catalog so the new characters and their illustrations can easily be added without much further need of coding.

This week I'll also be sharing the next song to be sampled, the theme used for teen Farah and the Main Menu, all you need to do is click on the name here to download it - Farah's Theme

Next Tuesday I'll likely share a release date on the next beta and list what'll be included in it. :3
Posted by SweGabe at 11:03 AM 29 comments:


Sorry for the slightly delayed Tuesday update!
I'm just coming back online after a three hour power blackout...fun times.
So like I warned last week, this entire time I've spent on watching GamesDoneQuick and finishing off trading cards in the process, did you hear any of my three donations that was read out during Freedom Planet, Illusion of Gaia and Super Mario Land? ;)

I probably did more I forgot about during all the nostalgia being showcased, but I do know I at least finished up three trading cards with Mhu'Tiki, two with adult Farah, three with Osira.
I suspect all of them will be included in the next beta release, although no date on that one yet!

And it seems like most people wanted to hear the Colussia theme out of the available songs, so just click on the name to download it - Colussia Theme

"Huh, update. Whats going on with that update?"

And the monthly question for June was if visitors of this blog also support me on Patreon, with 1788 people leaving their vote!

So with the latest beta released and all reported bugs from that already squashed, I'm allowing myself to take it a little bit easier this week and enjoy GamesDoneQuick until Sunday while focusing on finishing a bunch of trading cards done in the meantime...and if you aren't already watching that stream as well, you should! :3

By the way, I might release another LoQO OST preview song for the next update.
What would you rather like to hear? The theme for Caimridge, Colussia or Brightstone?

And with that short update, I'll see you again next week!
Posted by SweGabe at 9:40 AM 33 comments: