The latest beta was released over the weekend and had some content I didn't even mentioned during the previous update, such as a special surprise in a new sequence of the opening and another mini-scene! So yeah, the work I did since last Tuesday was adding those things and making sure the beta was ready ahead of time, then we had Christmas itself...and that's about it!
I believe the next two days will be spent finishing adding the cosplay photos to the game so they can be properly viewed after being awarded through the Lewd Boxes...then maybe I'll do some more storyline content, we'll see what I have to say during the first update of 2018. :3

And it's time to be be ending a week on a high note with promoting some more animations.
Below is a screenshot preview of a voiced one with Osira and...set in modern time and showing off her texting skills, by not letting something so casual as analsex to distract her!
(White guy variation available too, naturally)
So click here if you want to support the artist, although be warned it may be behind a paywall since adult content on Patreon isn't allowed to be displayed unrestricted. 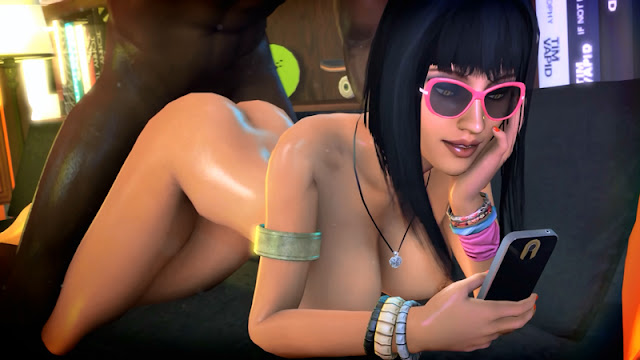 I've been overclocking my schedule this past week and have gotten a lot of work done, most obviously if you're checking out Mhu'Tiki on the side here, she'll be a playable partymember as of the next beta, which I will be releasing this weekend. :D
Storywise she'll join and become an active partymember after the Castle Warrengard arc, after she's returned from escorting all the escaped prisoners to Arlon and you learn she is a as capable spellcaster as Ra'Tiki...but if you're already past that point, she can join back in like everyone else from the camp!

But that's only the beginning, I've finished adding the second half of "tent mechanic" and introduced a second character you can invite into the tent, besides Farah.
Oh, and I've also added a new storymode cutscene when arriving at Odidania and hope to have an additional one done before the next beta, which will also introduce a new character...one you have seen previewed here before, but one that has yet to be included in the game.

With that, I'd like to wish you all a Merry Christmas while my Patreons can look forward to the next beta at the end of the week, I'll see you all again next Tuesday! :3
Posted by SweGabe at 11:29 AM 53 comments:

Anyhoo, the Lewd Box system is all done and implemented in the game, so starting in the next beta you'll get a Lewd Box for every Title you unlock and they can be sold for Krown if you don't feel like opening them and getting cosplay photos...win/win, right? :D
I've also updated the Art Gallery to take the new CG Style into account and took the opportunity to update the look a bit so the CG Gallery is more visually informative now that the names, such as Western/Eastern etc, has been removed.

The third main feature I had time to add was changing how the costume swapping menu function, although this one was spoiled to you a few days ago if you follow my Twitter! I think it both looks better and allows for more than 5 outfits per character to fit on the screen, not to mention it also gives you a larger view/sample of the currently worn outfit in the left-side frame.

And with that, I'll see you guys during the next Tuesday! :3 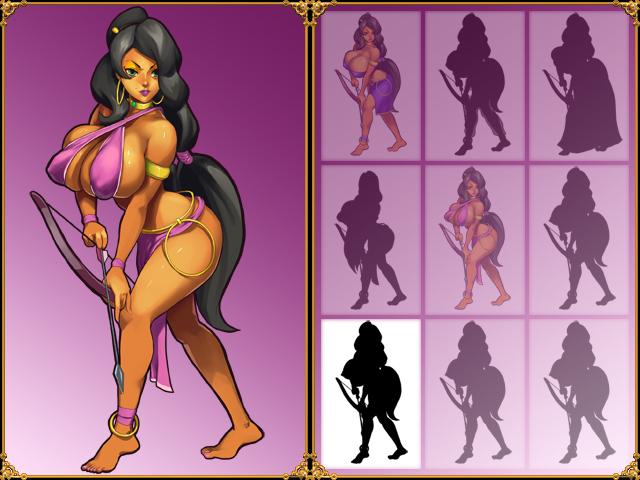 Another week, another update! :D
(Sorry for it coming in so late in the day!)

And boy, do I have some juicy details I've been dying to share with you guys!
Since I released the latest beta the other week, I've worked on something for the game I've been thinking about for some time now...a loot box system.
Now before you all grab your torches, pitchforks and come hunting me down, stay a while and listen! See, the mechanic itself isn't so bad when you take out the extreme corporate greed and money making scheme, but in fact, focus entirely on just making it a fun experience.

First thing first, there are no microtransactions and you can't buy them with real money.
That being said, these things are called "Lewd Boxes" in the game and rewards you with randomized cosplay photos that has previously only been Patreon exclusive, although the versions you get in-game won't be quite as large in pixel size.
You can't get dublicates and if the lewd box system tries to reward you a cosplay photo from a set you have already fully unlocked, you'll get an Emerald Gem instead. (Which in turn can be used to unlock CG Scenes you've already seen, but in alternative art styles instead of replaying the game)
You get a new Lewd Box per each individual "Title" you earn, which is rewarded for a lot of different things like defeating enemies, looking through houses etc, and you can also sell the Lewd Box for the ingame currency Krown as early players might be more interested to quickly earn a lot of coin instead of unlocking optional content.

Currently I'm not entirely sure how, but I'll try to come up with a solution to have the game count the titles you've already earned (for long time players) and reward you with all the Lewd Boxes you should have, possibly by a one-time use code for the mystical mirror in Colussia. :3

With that, I hope you like the sound of it and I'll see you next Tuesday!
Posted by SweGabe at 2:25 PM 75 comments: