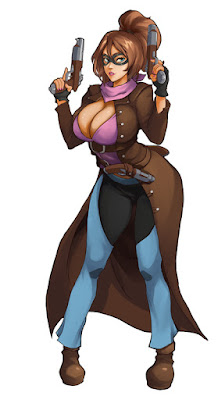 Purchase LoQO figurines - WebShop
And/Or follow me on - Twitter
I gotta confess...it's been a really good week! :D

The auditions I've got so far for Masquerade/Laquadia has been really positive with a few candidates even surpassing the old one! So the deep concerns and worries I had about finding a suitable replacement for Masquerade seem to have been for naught. x3

On top of that, 60 more lines has been added to the game, this time with Beatrix, and I've updated Farah and Gabrielle's battleposes as well to include the new ones for all the outfits, including their "Embarrassed" variations which I've decided to name "Distressed" instead since it has a broader meaning.

I've also finished all the indoor locations for Odidania, so even if I don't have time to add all the NPC's before this weekend, you'll be able to explore the city and experience all of this on Saturday when I release the next beta!

That makes it a pretty good update this time, yeah? I got more stuff lined up to show you in the upcoming weeks so it'll be a while before I have to reverse back to the boring "Update" title. ;3
See you guys again next Tuesday!
Posted by SweGabe at 11:52 AM 41 comments:

Purchase LoQO figurines - WebShop
And/Or follow me on - Twitter
Got some good news and I got some bad news, to keep the balance of the Force!

Bad news first, I need to remove 80 recorded lines from the game as I have to replace the voice of Laquadia/Masquerade due to the VA deciding she can't record anything more for my game and refuses to give clarification to if she meant temporarily or forever.
Since I can't just sit around and wait while hoping that may or may not change, I made the call to have her replaced and hope I'll be able to find a worthy voice to suit Masquerade's wacky nature.

Then we have the good news, I've added 90 recorded lines to the game! xD
As of the next beta, you'll finally be able to hear the voice of teen Farah and Gabrielle, in fact, I even got a sample of Farah's innocent voice for you right here! But batches of lines for both Osira and Beatrix has been sent out too so there is a very good chance they'll be done and included before that as well!

I've also continued my work on Odidania and finished off several more indoor maps.
Oh, and plans to add the first side-story (where you get to play as one of the female characters) is already underway with the CG Scene for it being made as we speak, although I'll try to pace out the time I spend on side-stories during development so they don't slow down the progress to the main story too much.

So with that, I'll see you again during the next update as always!
Posted by SweGabe at 12:21 PM 24 comments:

Purchase LoQO figurines - WebShop
And/Or follow me on - Twitter
Sorry for the boring blog titles for the past weeks, including this one. D8
I might be able to temporarily change it up for the next update, as it's possible Gabrielle's new battlepose might be done by then...but no promises!

This week I've been working on adding double the amount of choices you can have when inviting Farah into your tent, along with new sound effects, voice clips and animations.
I've also doubled down and added a cutscene somewhere in the game (not time restricted) that'll give you the same opportunities with another, less enthusiastic female character, but who...? ;)

And once again I'll be ending a week on a high note with promoting some more animations.
Below is a screenshot preview of a voiced one with Osira and...something cropped out she is acting very eagerly to pounce over, and follow-ups are planned if we put the pressure on the artist!
So click here if you want to support the artist, although be warned it may be behind a paywall since adult content on Patreon isn't allowed to be displayed unrestricted. 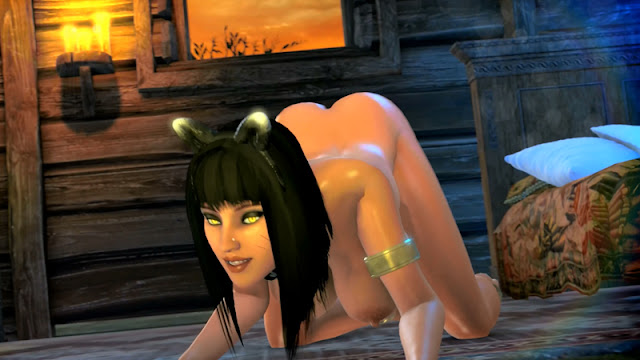 I'll confess I've at long last forced myself to slow down and chill for realsies this time by taking last week off, but with batteries recharged and the checklist of things to do seemingly infinite, I headed back into development as of yesterday and began with tangling with that beast called Odidania.
All outdoor maps for the city is done, but I still need to make the indoor maps and I'm aiming to have everything done before I release the next beta towards the end of this month. :3

And with that tiny update, I'll hopefully have more results to share as I see you next Tuesday!
Posted by SweGabe at 12:46 PM 27 comments: