Feels like I've been working on Odidania for weeks, and it might just be because I've worked on the damn city for weeks! It's been updated several times and new maps have been added every couple of days, so while the basic city is now finally done (not counting indoor locations), I can say it ended up being much bigger than Kahr, but not quite dethroning Colussia yet. :3
Down below you can see an updated look for the main street of Odidania and compare the screenshot to how it looked last week, to see how it has evolved during this time!

I also recall this month is freaking over already, and I promised by Patreons a new beta I kinda forgot while my head was stuck in city development...but I'll still make good on my word and release a new one tomorrow, although it will hardly have anything new besides that "repeatable" sequence with teen Farah I mentioned before, how it takes choice, pixel sprite animations, voice, sound effects and mix it all together.

And in other news, next week I will likely have something rather interesting to show off.
It's game related, but at the same time, not...call it a merchandise...you can physically touch. ;)

Until then, see you next Tuesday! 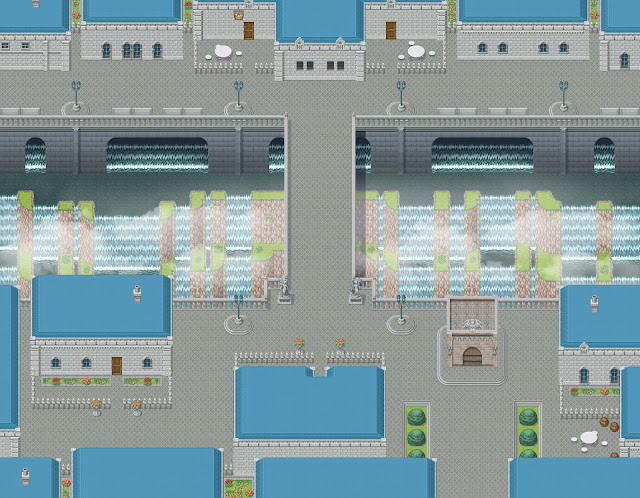 Another week, another Tuesday and another update! :D

It looks like all the cogs fitted in place and my vision for Odidania went through without a hitch, my original idea to have it be a city based on a mountain cliff surrounded by waterfalls worked and I'm still adding more areas to it as we speak! So far Odidania has four maps which makes it just one map smaller than Kahr, but I expect it to end up being nearly the same size as Colussia.
On Twitter I released a screenshot of an "outlook" at Odidania's western edge overlooking the region, and below you can see an early draft of how one of the city maps look like. 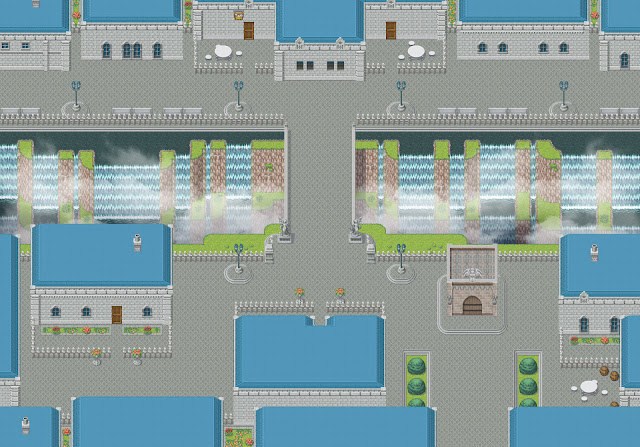 Things are coming along smoothly, that is always nice. :3
The VA casting audition is right on track and the most successfull one I've had since I began making games, as so far there has been nearly as many entries as there are female characters in LoQO:O!

As for the game production itself, I'm currently working on the fourth new location for episode III, although it has slowed down a bit since I need to make a custom tileset and create some new resources for the city of Odidania which was briefly mentioned during the High Lord Gathering.
It's also the next available town you visit after Kahr.

While it's way too early to state any specifics as I have a few different ideas on how I should make Odidania, I hope it will have this waterfall, exotic cliffside city theme going on.
Or if that turns out to be too ambitious, I always have the castle city idea to fall back on, like how Castle Resteed was made back in LoQOII. x3

This has been a full week for sure, with plenty of things going on!

For one, I'm currently holding a casting audition lasting until next month to give pretty much all of the female characters voices, and it's going very good so far with a lot of really promising talents!
This has been a constant problem in the past with several VA's just up and vanishing, leaving me no other choise but to re-cast them...but that is also one of the gambles with adding voices early on in a project when several years still remain, you have no guarentees.

Meanwhile, another location for episode III is almost done!
And teen Farah is finished for repeatable "romance" moments in the tent, eh eeeeh!?
With the "Demo Fap Reel's" I've had arranged, it's possible I might focus on Laquadia next, Masquerade, Naz'Raala, or perhaps even Osira!
Although it will most likely end up being Laquadia or Naz'Raala, the repeatable romances makes more sense if they are done after having a CG Scene moment with them.
Like, say the CG Scene between the protagonist and a woman is their "introduction" and following scenes, may it be CG or pixel sprite animation, are simply follow-ups to them. :3

And let's end this week on a high note with promoting some more animations!
Below is a screenshot preview of a voiced one with Osira and a minion, so click here if you want to support the artist, although be warned it may be behind a paywall since adult content on Patreon isn't allowed to be displayed unrestricted.

See you again next Tuesday! 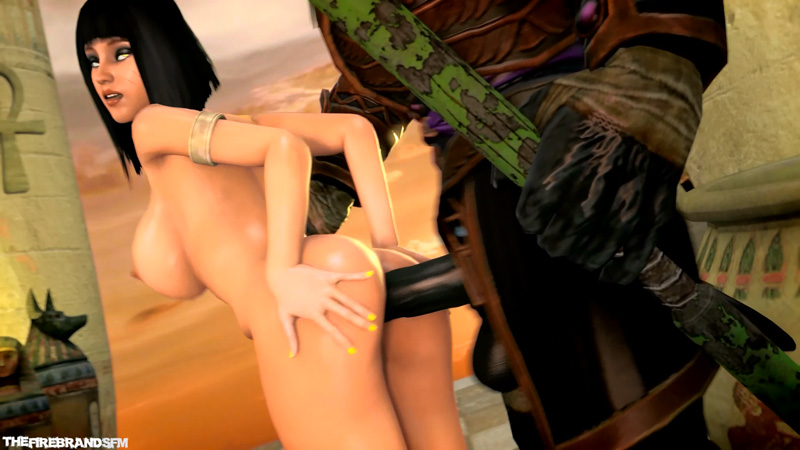 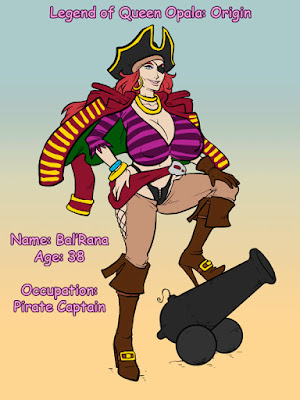 Support production of the LoQO games at - Patreon
And/Or follow me on - Twitter
Ta-daaam, there be booty on the horizon!
Bal'Rana the Pirate Captain who've been around since the first LoQO game has now returned with an updated look, but still surrounded by terrible and stupid crewmen!
Not shown in the preview are her two guardian Saberwolves, Skulls and Bones.
I don't want to spoil learning more about her in-game, but let's just say things looked a little brighter between the events of LoQOII and LoQO:O before she met her match and crashed her second...or is it third? Anyway, crashed her newest ship on the coast of the Beldorian Empire where she set up shop. (The Boss Gem Shop!)

The location she appears in has been completed since last update as well, and I'm currently working on something I believe everyone will enjoy quite a lot...think the voiced only "scenes" in the first LoQO game, but now with sound effects and sprite animations to go along with it for some repeatable action. ;)
It's a lot of work fine tuning those sound effects so they are played in just the right frame and volume, but I think you may be able to experience at least teen Farah in this new feature being added to the next beta hitting my Patreon later this month.