Sorry for the late update in the evening!
So let's get straight to it before the day has turned into Wednesday by the time I'm done!
Wait, I just got a severe case of John Woo...

Anyhoo, this week has mostly been spent on updating the art gallery and rounding a few corners in preperation for the next beta...which will be released later tonight! Another thing I have worked on is an new mini game which you'll be able to play against all your female party members, although only Bal'Rana is currently available and you can see a preview of the graphic layout down below.
Yup, it's some good ol' fashioned strip gameplay!

So with that, I'll have to spend the next few hours compiling the beta.
Enjoy the evening, and I'll see you again next week! 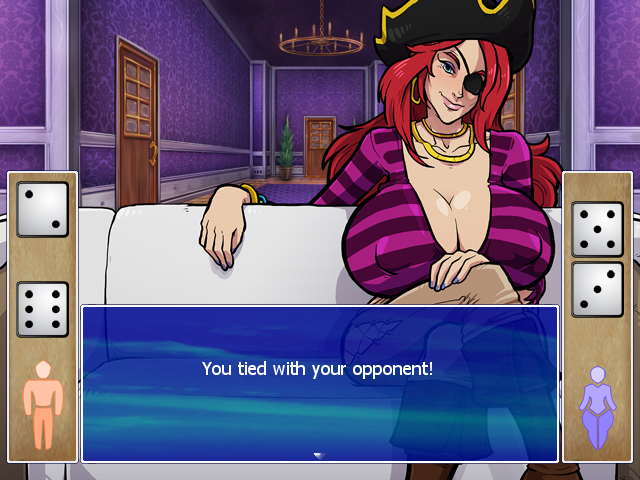 Sorry for the late update in the evening!
So let's get straight to it before the day has turned into Wednesday by the time I'm done!

I think I've mentioned it earlier in another update, but after I finished the Skalhalm arc, my intention was to go back to work on a story sequence right at the start of episode 3 where you head for the Illusian Forest to search for Opala while Kythie is recovering.
That is what I've been working on this week, all the basic maps are done and next I need to playtest them myself to make sure they are working properly as the location will work quite differently from anything else I've made before since there is a reason people who go in don't come back out, after all...and no, not due to an unbalanced Golem guarding a bridge this time!
This sequence will be added in a similar fashion like meeting your mom, it'll be worked into the story but can be gone back and experienced afterward without screwing up progression.

This unfortunately won't be included in the next beta though, as I won't have time to add any cutscenes before the end of the month when the next release is scheduled.
The only thing holding the next beta back from being distributed today already is me waiting for some CG illustrations to be finished for the newest scene, and some gallery updates.

But I think that'll do it for this week, tune in again next Tuesday y'all!
Posted by SweGabe at 2:38 PM 19 comments:

I think I'm starting to get the idea of hibernation...
During the heatwave, you oddly enough didn't feel too sleepy, no matter how little you slept.
But now when it's over, you feel a lot more tired...the bears are on to something, people!!!

Anyway, progression has been coming along smoothly with the game development.
I think the overhauled Castle Warrengard is completed now, with the new upgrades being available and more stores has been added for purchase in Odidania, which makes every upgrade for the citadel possible to make if you have secured all the trading routes/resources.
You don't literally need every single one, but it never hurt to be safer than sorry!
So the next beta will be released near the end of this month, featuring the renovated castle, two new mini-scenes with the protagonist, Bal'Rana as a new Tavern Wench Challenge candidate, and a little surprise I'm sure players will appreciate, even though it has never been requested. ;P

And while she isn't ready for purchase yet, here is a teaser for the Mhu'Tiki figurine!
Her default outfit couldn't be made as it had too many thin parts, so she was given a tiny little bikini instead, but will also come as a topless variation once available.
With that, I'll see you guys again next week! 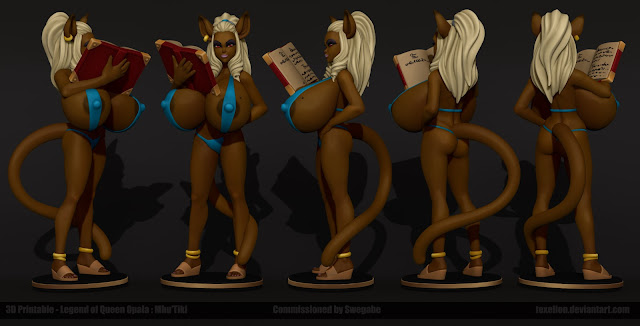 Nah, kidding, this week have actually been really productive!
Not one, but two mini-scenes has been added, both featuring the main character, one being the long awaited one with Roseus you can trigger any time after defeating her, and the second with a character you haven't been able to romance before...but who?

I've also been working on the second phase of Castle Warrengard.
Finalizing the renovated version and prepping it for being included in the next beta.
As most know, the game never had enough resources to allow you to do the "last" upgrade, and while every other upgrade still needs to be manually performed by you, the full interior renovation will be an automatic story related part that is added once you finish the Blackgard Stronghold arc.
Some of the new upgrades the overhauled interior brings to the table is a courtyard/garden and establishing different shops within the citadel...but I don't want to spoil too much so I'll leave the rest up for you to discover on your own.