Liiiiive from not New York, it's Tuesday night update!
Support me and production of the LoQO games at - Patreon

This week we'll be addressing the issue that is Offbeatr.
All the different pledge rewards including the exclusive in-game items/equipment, Mature Farah Costume and the voiced thank you message from Osira have all been finished since last week with me trying to send them on daily basis ever since...however, Offbeatr is a complete mess and doesn't allow anyone to send messages, and it doesn't let us creators even check our list of pledgers so we can stay in contact and hand out the appropriate rewards to our supporters.

So as of right now, I'm not entirely sure how I'm supposed to proceed as the rumor has it Offbeatr will soon go under, rather than being fixed.
What I consider the best solution would be to simply offer all my Patreons these same rewards so they can at least be shared, but I fear those who supported me on Offbeatr would feel cheated.
A compromise would be for Offbeatr supporters to consider that Patreon did contributed for the Beastman Mode they wouldn't had the pleasure of experience otherwise, so it'd be a give and take situation.

But again, not everyone might agree with that, so I am in a difficult position.
If you supported me back on Offbeatr, how would this make you feel if I went ahead and did it?

However, next week will be a more cheerful update so I'll see you then as always! :D
Posted by SweGabe at 10:41 AM 66 comments:

Tuesday update...AGAIN!?
Support me and production of the LoQO games at - Patreon

On good and bad, I heard a rumor that Offbeatr might be closing down soon, so that had me stop everything else and focus on really makinf sure I finished adding all the content that's exclusive reward tiers from the crowdfunding.
And with that nearly done by now, I should be able to send out the Offbeatr exclusive "version" of LoQO: Origin - Episode 1 before next Tuesday that includes special equipment to some, and a mature Farah skin for teen Farah to others!

In other news, the "cheat necklace" will be returning in a different form for the next beta, with a more variety of acceptable codes and no longer punishing gamers by disabling titles/trophies or save access like it did back in LoQOII.

And probably the largest change I have to announce...is a change of heart!
Dafuq, you say? Well, I've come across a VA that has changed my opinion on the non-voiced protagonist so I've decided to actually have the character voiced after all.
Some might be a bit weary of that since a terribly voiced main character can ruin a whole game, but what would you say if Devon, the protagonist, had the voice and talent of...say, Booker DeWitt from Bioshock Infinite...?

Lastly, but not the least, the High Lord Gathering is soon upon us, and the introduction of Queen Opala imminent as she makes her case to the council in hopes of gaining the support of the Beldorian Empire in the war against An'Terra both the kingdom of Namaria and Egypt is fighting.
But they are a corrupt bunch, so here is your chance to pitch an idea of what they'll demand of Opala on the spot if she wants to prove her commitment and gain their favor... >;D

And with this update, I'll see you next week and end this one with a screenshot of Fierra Falls! 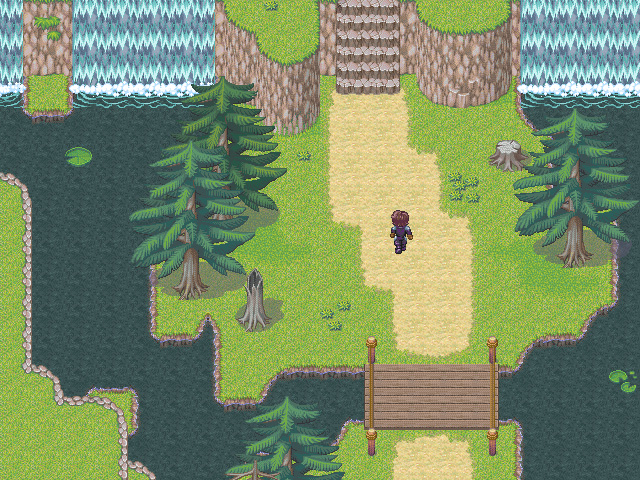 Weak-sauce Tuesday update... D;
Support me and production of the LoQO games at - Patreon

AGDQ is sadly over and it's time to get back to work!
But between last blog entry and this one, I really haven't gotten much work done on the game due to the weekly long stream of awesome speedruns...though I have been rounding up a few more trading cards, all with Kristallia - she takes Contoad like a pro. >3

Anyway! This update is really weak-sauce since I barely have anything to report, but next time should be more enjoyable as I'm heading back into development and hope to get the High Lord Gathering event out of the way and open up a large new portion of the worldmap!

Tuesday update with your monthly poll results!
Support me and production of the LoQO games at - Patreon

This month it was asked which your favorite game version to play in LoQO: Origin - Episode I was, with a total of 2113 votes gathered!

All in all, I think the results were pretty close to each other which goes to show none of the versions are completely useless and not used or preferred by anyone. x3

So! I hope you all had a good start at the new year! I managed to be able to release the new beta I hinted at last week, and shared it with the supporters on the final day of last year! Me, I've been doing my thing like usual and watching GamesDoneQuick since it began the other day, they'll sadly be distracting me for this week and probably have me focusing on finishing off more trading cards in the meantime instead.

I'd also like to make a small shoutout for a fellow adult game maker who is currently running a crowdfunding for his project Slice of Venture 2, more competition never harms and ensures us old, cranky "veterans" in the industry stays on our toes and doesn't get lazy. ;)