I was meaning to share a fan favorite today, who'll be returning as the third "Ultima" monster which will make an appearance in Illusian Forest...but picking the color scheme turned out to be a bit trickier than expected, as she'll sport a new look, much like Bal'Rana.
She'll definitely be ready for next week though, so expect to see her then!

Meanwhile, I've mostly been working on the last cutscene taking place in Illusian Forest.
I can't go into too much detail without spoiling some fun, but I'm pretty sure you're going to like it! It'll also have a CG Scene between the protagonist and Opala attached to it, but I haven't started that portion of the cutscene yet.

And I'm afraid there won't be a new beta this month, due to the week of work I lost while sick.
It's not a good idea to release one while the Illusian Forest arc is incomplete, as it'll get players stuck in that arc without the ability to continue on with the rest of the story.
In return...I'll have it done and ready for Christmas!

And that'll be all for today, see you again next week with the Ultima reveal!
Posted by SweGabe at 3:40 PM 28 comments:

Aaaaand here we are again, one week later!
Let me get this out straight away, my storymode streak got foiled by a cold I caught like the very same day I made the previous Tuesday update, and it's been difficult to get into the mindset of all the characters during a cutscene when you have scrambled eggs of a brain to work with.

Even so, I persisted and tried to see what else I could do while being downed and sick.
Which ended up being fixing a few bugs, but it's also when I came up with the "booth" mechanic and started adding them to most places where it'd make sense to have them, like changing booths, WC booths, and even confession booths in the Cathedral of Colussia.
And if you are a deprived, dirty pervert...like me, you know where this is going.
GLORYHOLES FOR EVERYONE!!!

So with that little tidbit, next week will hopefully be more fruitful and healthy!
Posted by SweGabe at 3:32 PM 18 comments: 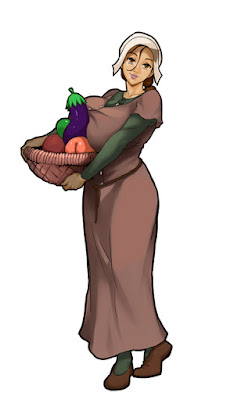 Boom, an innocent, sweet mother has appeared!
Here is a preview of Cecily's "battlepose" in the new artstyle, but perhaps its better to start calling these for journal entries as using the word battle is misleading, since several of these characters will most likely never appear in a fight.

It's been another very vegetable boobies week...
Oh, sorry, got distracted, I mean fruitfull, with my motivation being top notch! Several more cutscenes have been made, the start of Illusian Forest arc properly worked into the game, and a bit more than half of it already done! Illusian Forest will also be housing a new "Ultima" enemy not yet revealed, a fan favorite if you will...fu fu fu~

And you know what that means, I'll see you guys during the next Tuesday!
Posted by SweGabe at 2:56 PM 35 comments: 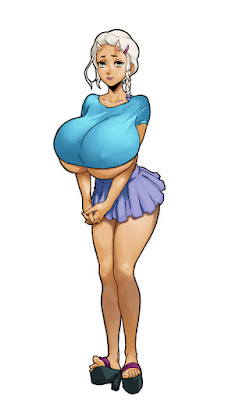 Today is brought to you by the the letter T.
Titanic Teen Titties!

Speaking of mouthfulls, here is a preview of Elin's battlepose in the new artstyle, Beatrix's pride and daughter who isn't far off from making her first personal appearance in the game!

Game development has been going really well this week with my muse coming back to form after being drunk and hanging around crystal fairies for far too long.
So I've managed to get several cutscenes down, ranging from a few small ones to a big one that'll be my cue to go back and add that Illusian Forest arc I've teased about enough.

Oh! I've also added a dose of Naz'Raala content as her previous CG Scene can now be triggered in a non-renegade way, and you're also able to engage with her in the "tent mechanic".

With that, take care and see you next week!
Posted by SweGabe at 3:01 PM 25 comments: