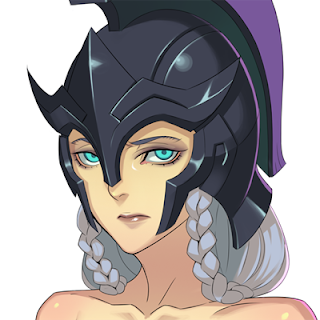 Alrighties! Like mentioned past week, I ended up releasing the latest beta over the weekend that fully included Beastman Mode and also introduced Beatrix to the story.

Hmm, can't really say I've had enough time to do much else, Beastman Mode was a little tricker to add than anticipated but were included without a single issue...I believe that is worth a pat on the back, to go along with that kick in the arse for taking so long!

Oh, and speaking about Beatrix earlier, here a emoticon from the game, featuring her standard expression.
You won't see it often, but she IS indeed capable of putting on a smile.
Besides that, I've mostly been tweaking various dialogues across the game, adding more context to the lore, the world and its character while also trying to get back into the story so I can continue from where I left off.

But that'll be all for now, see you next week as always!
Posted by SweGabe at 9:39 AM