Tuesday F.A.P update!
(Family Agitative Porn...Yup, just made that up!) 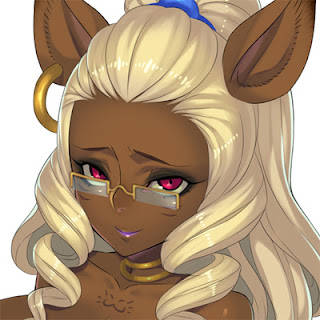 This past week I've been busy with adding more locations for the game, actually managed to add four new ones! We have one secret location, then Valley Checkpoint, Serenity Bridge and Uncle Dad's Ranch...all names are pending and not finalized. x3

I also have four CG scenes coming up and planned out, though I may only be able to finish one before next update.

And I mentioned last week that three more romanceable women would become available nearly the same time during the story, so here is one of them! Mhu'Tiki with her standard expression emoticon.
By default, she'll always wear her glasses and will sport a british accent to her VA.
While you can't change how she talks and acts, you will be able to convince her to remove the glasses if you for some reason don't like them.
If you don't remember or missed out on the information I shared about her in the past, she is a Neifu and from the same tribe as Ra'Tiki, but sold out her own kind because of her insatiable lust for mating - and she also have really big breasts, which is extremely rare for a Neifu.

But that'll be all for now, see you next week as always!
Posted by SweGabe at 9:40 AM