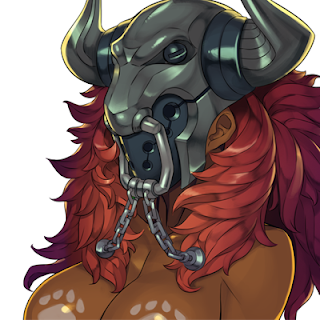 Well, this has been a productive week as hell! And thankfully not a trace of sarcasm in that sentance as I've really been making a lot of progression on the storymode with the time I've had! :D

The Brightstone arc has been left behind and the party is currently on their way for the High Lord Gathering, nearly arriving at the Imperial Manor from where I left off just minutes before writing this.

On the way, you'll be learning a few more things about the characters and what the future holds...but I won't say much more since I don't want to spoil every detail for those with beta access. x3
This week I'll also be sharing the emoticon for Naz'Raala, the mighty and mysterious right-hand woman for the self-proclaimed Baron of Warrengard, a cruel bandit warlord currently living in the castle you'll claim for yourself further on.

More details on her will be revealed next week along with her battlepose, so stay tuned and I'll see ya'll for the Tuesday update to come our way!
Posted by SweGabe at 11:16 AM