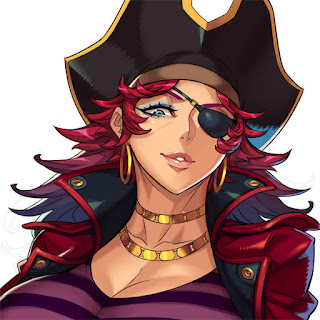 Bal'Rana the Pirate Queen makes her glorious return as a recurring character in the series, but now more than a brief encounter or mere fanservice cameo!

She has set up shop along the southeast coast of the Beldorian Empire, where she basically wrecked her last ship, and tries to make a living while figuring out where to go next with her crew of pussywhipped sailors.
And while the high seas have been cruel to Bal'Rana's attempted, pillage voyages, she did come across a little something that is said to let the heart of men "relive lost opportunities".

Something she is taking full advantage of to get that booty filled with sparkling coin!

Meanwhile, I've spent more time than I'd like to admit to hunting down and squashing a a couple of persistent, evasive bugs...but successfully nonetheless! Such as the rare one that makes the cutscene arriving at Arlon for the first time in a playthrough not play and leave you with a black screen, this turned out to be caused by visited Arlon in the "future" and exploring a specific cave.
Anyhoo, I've also been working on a new location and added some additional dialogue to the cutscene that takes place when returning to Castle Warrengard before heading to the Iron Spire.
Oh, and I'm also processing the results of an audition I held to give all the female character voices, a casting call that ended up giving me over 300 voice clips to go through. xD

And with that, I'll see you next Tuesday!
Posted by SweGabe at 11:28 AM