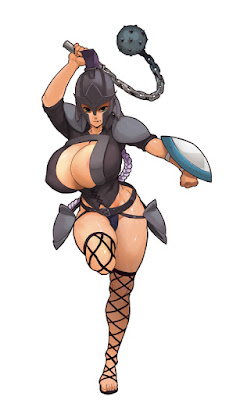 Time for another, new battlepose!
This time with Beatrix as she shows off the...uhh, generously protected armor set of a female Crusader! But really, armor is only for those who intend to be hit in the first place, am I right!? ;D

The game is coming along as I did indeed managed to turn my back on the second Iron Spire and move on with my life, and if development keeps going at the current direction and pace, I do believe I'm able to release the next beta later this month with a fairly big chunk of storymode content.
However, you can probably still blast right through it in 20 minutes if you skip all the cutscenes and know where to go.

It might also be worth mentioning the April Fool's Day joke for this year was a bit botched as I teased it on my Twitter but with no one reacting or realizing the upload on my Patreon was done on that date.
To make a short story short, people following me on Patreon will now be able to get these weekly updates as a summary v-log at the end of each month with the voice of Mhu'Tiki being the hostess...the joke being people weren't meant to take the announcement seriously, when in reality, it was a true thing.
Ah well, everyone wins!

And with that, another update coming next Tuesday!
Posted by SweGabe at 2:07 PM