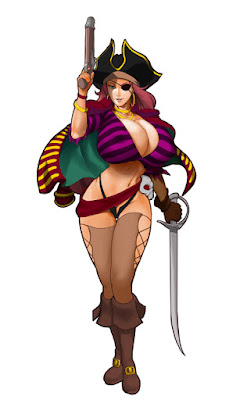 And so it's time to share some booty!
Y'arr! Ther' be treasure, matey! Raise me mast! Etc!

Or in short...
Here is a preview of Bal'Rana's battlepose.
The unfortunate Pirate Queen is getting a lot more focus and sceentime this time around after essentially just cameo in the previous two games, with most noticably running the shop you'll be able to use to unlock CG Scenes with those Emerald Gems you've hopefully been saving up, and not sold!
The shop has been previewed in the past, however, it hasn't been fully implemented in the game yet as I've been busy working on story content instead.

Speaking of which, I'm currently working on the last cutscene taking place in Blackgard Stronghold, which has been slightly expanded in the map count as I decided to make a small portion of the forest outside a visitable area, instead of one that only appears in a single cutscene.
Once that is done, I'll be able to release the next beta with that arc finished and your home available for exploration! That should be before the end of the month, unless something comes up!
And yes, that does include the introduction to Cecily. ;D

So, next Tuesday, new update!
Posted by SweGabe at 1:11 PM