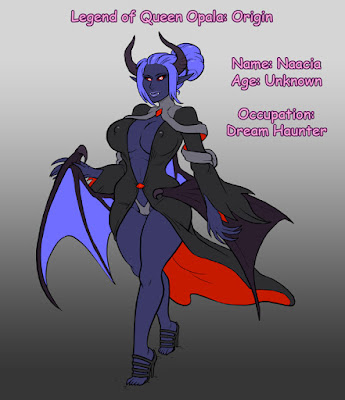 If anyone didn't predict Naacia being the next "Ultima" to be revealed after last week, raise your hand! I said HAND, not the...anyway...

But yes! Naacia will be returning from the previous games, with a new look and the same personality, as the dangerous entity who has Illusian Forest under a spell, and will play some pranks on the protagonist and the others as they venture into the woods to save Opala from the cursed region.
Cecily may or may not be "used" in Naacia's attempt to corrupt the protagonist's mind as well...

As I mentioned last week, one of the things I've got done since last update is adding a new CG Scene between the protagonist and Opala, although I'll probably spend some more time fine-tuning that and add a little twist which will only happen if you made a few specific choices in the past, but to tell would be to spoil the surprise!

The final cutscene in Illusian Forest has also been remade, with now a much larger focus on Naacia's effect on the protagonist's mind and with the inclusion of some...dream-like sequences, much like what Jake experienced back in the first LoQO game when he came across Naacia.
All in all, I'm happy how everything is turning out and I hope you'll be enjoying it too when the next beta hits later this month, around Christmas time!

And with that, I'm fading out with a smoke bomb and will see you again next Tuesday!
Posted by SweGabe at 12:46 PM