"Thank you Mario! But our Princess is in another update!" 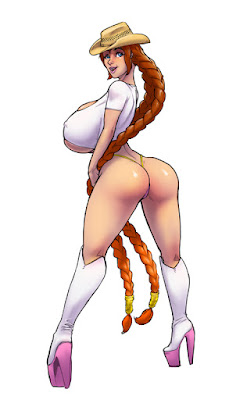 Support production of the LoQO games at - Patreon
And/Or follow me on - Twitter
This week continued as normal with most of Castle Warrengard now done and focus switching back on making sure the additional Beastman Mode works as intended, so it be can be activated for the next beta hitting this month...although I don't think it'll be released this week, but rather in the next one.

Here is also Sunny-Sue Ellen's battlepose for the game!
It's highly unlikely you'll fight her, but as mentioned before, all characters appearing in the journal has a battlepose so their name isn't displayed with just text and an empty background.
You just know by simply looking at her that she is the pride and joy of Uncle Dad's Farm! Surely the best wankerer there is on this side of the ocean!
And I ain't talking cow milking, son!

But yeah, more accurate beta news will likely drop in the next update so I'll see you then and there!
Posted by SweGabe at 11:11 AM