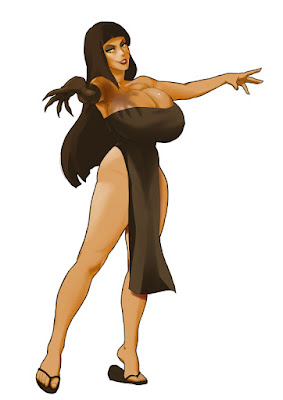 Time to finish of the new battleposes for the egyptian trio by showing off Osira, who'll apparently be in Beyond Good & Evil 2.
...Just with a different haircut and without the loveable, charming personality. ;3
If you don't know what I'm referring to, check out my Twitter for all those pointless express-without-thinking tweets we've come to love from the internet!

In more serious news, the story sequence taking you through Blackgard Stronghold has been all polished up by now and in a much more solid state than the rushed release. (Which had surprisingly few issues!)
A new set of weapons have been added to the inventory system and new skills have been tweaked to introduce the character who'll be teaming up and be playable in the next beta.

And while it might be too early to get hyped, I'm also currently experimenting to add animations during battle by the same artist who made the opening sequence with Kristallia and these new sets of battleposes.
If it works out well enough, I'll branch out and expand upon the mechanic, but for now the idea is to have summons you can call upon like in Final Fantasy games.
Mainly, I'm thinking of the powerful monster girls you can encounter, with the plant babe Roseus being first out as she is already in the game, but also the MILF harpy and the mermaid on the table for later as you encounter them...see it as a nice little bonus for defeating them!

And with that, I'll be back with you next Tuesday!