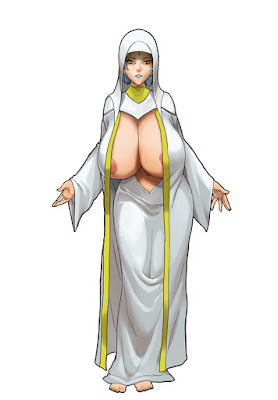 I could've sworn I uploaded this before...
Although since I can't seem to find it anywhere, here you are, Laquadia's battlepose and her holy mammaries in the new art style!

As for game production, I'm happy to report all three locations mentioned in the previous update has been completed (except NPC conversations), meaning more loot, illustrations and monsters has been added while the encyclopedia have also been updated to take these into account.
Thus, I can confirm the next beta will be released later this month with these locations available, a new full CG Scene with the protagonist I reported on before, five additional opponents in the strip dice mini-game, and whatever else I can get done before then. :3