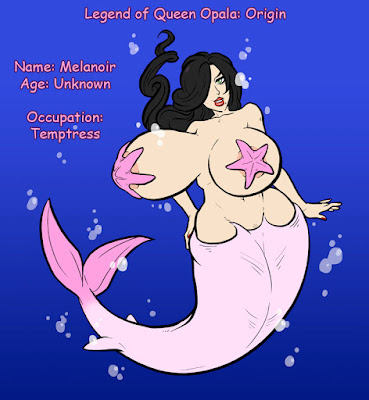 The latest beta was released this past weekend as hoped and I got a new character to introduce, HYPE!!!

Okay, so not really a new character in the traditional sense since the cast is big enough as it is, buuuuut...
This is Melanoir, the second "Ultra" enemy like Roseus before her and I think this will be a running theme for Origin where all Ultra bosses who has a short lore attached to them will be all (or mostly) females and not entirely human.
For Melanoir, it's pretty self-explained by simply watching...anything below her boobs, as hard as that may be! She is a busty mermaid! :D

I know it might sound cliched, but I was thinking about adding a simple, fishing mini-game and it would be pretty amusing if Melanoir's introduction would be through that. x3
As for game development itself, besides rounding off everything for the past weekend release, I've been working on the next secret location...although I'll keep the name a secret until it's discovered by you gamers yourself instead, as it's a bit more of a spoiler than just mentioning Summer Cove or Immemorial Glade. x3