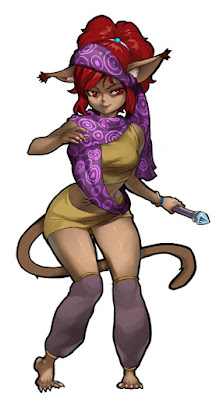 And of course, Ra'Tiki is the next character finished and included with the new artstyle and have her "Distressed" pose variation done. (Not included here!)
Other than that, I've also dipped a bit more into the first "sidestory" that'll have you play as a female character from the game to cover a bit more lore and history behind them, while also ending it with a scene.
I think these optional stories can be breezed through in just 5-10 minutes if you skip everything, but might entertain you for 30-60 minutes if you take your time.

If I had a publisher, you can bet they'd force me to make these stories seperate DLC instead...oh, and make me include loot boxes with randomized panties and cock enchantments!