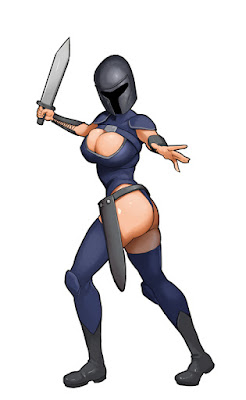 I was going to add a screenshot of Beatrix's set reward animation as a preview this week...
But quite honestly, there isn't a single frame out of it that could be considered wholesome!
So instead, have the battlepose for the perfectly family friendly Beldorian Huntress enemy type! :D

Speaking of that animation, I've been tinkering with it on and off the whole week and it's been more complex than expected to get everything to click.
Making voiced loops with sound effects is a bit tricky, especially when giving the power to proceed to the player as the different SE need to be balanced to not be too repetitive, but it'll be finished shortly!

Other than that, I've also corrected a few tiny bugs, including one regarding the introduction scene with Kristallia in Odidania I stumbled upon by accident while adding a new side-quest.

And that's that for now, so I'll see you guys again next week!
Posted by SweGabe at 11:58 AM