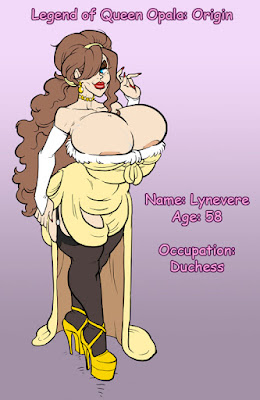 Early Tuesday update for the WOOT!

I know, but hear me out! Before you groan over yet another pair of huge boobies squishing up against your computer screen, let me calm you down with pointing out next week's reveal will be a girl with a chest only rivaled by Ra'Tiki in terms of tiniest titties to balance things out!

With that out of the way, let me introduce you to the visibly eldest woman out of the entire cast, the self-important and vain Duchess Lynevere.
She'll have a few side-quests related to her and be the owner of an estate, previously known as Duke's Tavern before the name change.
Lynevere belong to one of the richest families in the Beldorian Empire, and I may alter the story slightly to have her replace the current NPC who attended the High Lord Gathering and is funding the digsite at Kahr.

In terms of what I have done this week, I've been working more on side-quests and expanded upon one of them to include some fanservice and more Gabrielle shenanigans, although no new CG Scenes as it's too late now in production to add additional ones for episode 3.
(But there will of course be plenty more later on!)

However, the International Edition artist have completed another full CG Scene too!

So with that, stay tuned for next week!
Posted by SweGabe at 5:56 AM