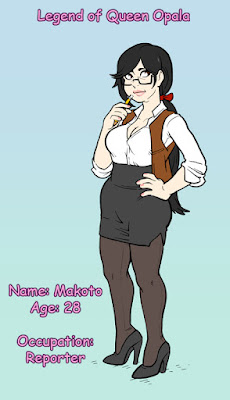 And here she is at last!
The kuudere reporter who'll do anything to get the scoop and won't hesitate to follow the protagonist and his party to the end of the world in order to secure inteviews no one else would be able to accomplish!

She is very unlikely going to be a part of episode 3.
However, Makoto will eventually be seamlessly worked into the story as a side-character who'll hound the protagonist for exclusive stories ever since learning he is the first person to break out of Darkthorn Keep.

As for the game production itself, I've been replacing the graphics for quest-givers to make them easier to spot, and implementing visual cues to make trading card spots/holders easier to spot as well.
(With the appropriate item)

Duchess Lynevere has also been added to the game and completely replaced Mistress Gloria who was one of the guests at the High Lord Gathering, along with belonging to the wealthiest family in the Empire and also funding the dig site in Kahr, with a sample of her emoticon set being presented next week!

And with that, I'll chill for the rest of my birthday and see you again next week as always!
Posted by SweGabe at 3:10 PM