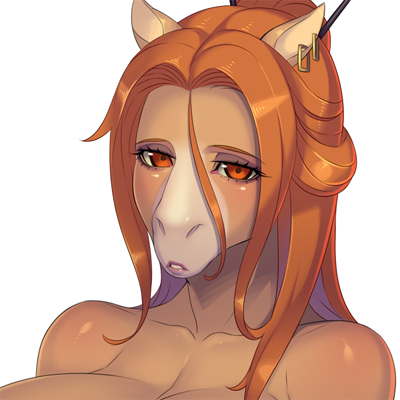 Tuesday update, last one for the year!
Support me and production of the LoQO games at - Patreon

In the last poll, I asked which game version was preferred in LoQOII, with 1448 votes gathered!

It was even, but maybe more surprisingly, 16 people preferred to play LoQOII with all adult content disabled!
So this week I'm sharing another emoticon, this time of Layla the Mare - Normal Expression.
She plays a very little part in the first episode, but can still be found doing maid duties at the Emperor's Manor, for those who explore and are interested enough.

And as for the game production, this week has been spent on finishing Gabrielle's side activity, which has been appropriately named the Tavern Wench Challenge, where the masked woman challenges every male to a lewd game of drinking! Raise her fame by replacing public posters in towns and see her having to deal with larger crowds as her exploits are growing famous! Oh, and I'm also in the progress of adding more story, with another mini-scene or two being available in the next beta, whenever that hits!

I think the complete version of episode 1 will in total have 5 full scenes, and around 7 mini-scenes.
But that's all for now, Happy New Year everyone!
Posted by SweGabe at 11:19 AM